About US
Home / Meet Our Team 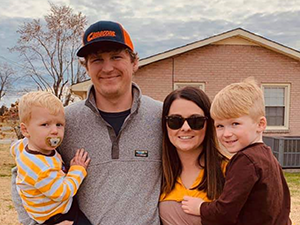 By some thoughts, Gage was ruined from the start to have a horse and livestock trailer pedigree unlike most. He grew up in the horse trailer and equipment industry following after his grandfather, Louis Smith founder of Select Trailer Company, and his father, Richard Smith current owner of Select Trailer Company. As early as the tender age of 7 he was presenting a cattle trailer to FFA members in Montgomery, Al and keeping company with the likes of John Lyons, Monty Roberts, and Sam Powell among others at clinics throughout the region. So to be enamored with trucks, trailers, 4 wheelers, horses and most anything outdoors came naturally and has been a passion for years. An Eagle Scout growing up in the rolling hills of Middle Tennessee Gage loves horses on the trail, in the show ring, hunting, fishing, camping, clay target shooting and more. Outside of selling horse trailers, he spends most of his time chasing his two young sons alongside with his wife Lauren. Gage has been actively selling trailers and helping to run the family business since 2014.

Roger Perryman- Service Dept. Mgr. Roger didn’t grow up in the trailer business, but he’s close. Starting with us over 20 years ago as a young whip as a part time service tech, it wasn’t long at all before he decided keeping trailer owners happy was a better fit than his factory job. Once here, he has overseen our growth to one of the largest and most complete service centers in the region. Custom fabrication- done. Welding- done. Custom carpentry- done. Whatever- done. Roger spends his days making sure that our service techs get your job done, on time, the right way. And as you can see from the picture, he’s apt to be out on the trail on the weekends with the family in the SxS and motorhome, unless they are home baling hay for their goat herd.